What can the fruit fly teach us about taste and how chemicals cause our taste buds to recognize sweet, sour, bitter, umami, and salty tastes? Quite a lot, according to University of California, Riverside, researchers who have published a study exploring the insect’s sense of taste.

“Insect feeding behavior directly impacts humans in many ways, from disease-carrying mosquitos that seek human blood to pests whose appetite can wreak havoc on the agricultural sector,” said Anupama Dahanukar, an associate professor of molecular, cell and systems biology, who led the study appearing in the Journal of Neuroscience. “How insect taste neurons are organized and how they function is critical for a deeper understanding of their feeding behavior.”

The fruit fly has multiple taste organs throughout its body to detect chemicals, called tastants, that signal whether a food is palatable or harmful. It is still unclear, however, how individual neurons in each taste organ act to control feeding. To explore this question, Dahanukar’s team used the fly pharynx as a model to study whether taste information regulates sugar and amino acid consumption at the cellular level.

Dahanukar explained animals rely heavily on the sense of taste to make feeding decisions, such as consuming nutritive foods while avoiding toxic ones. “In mammals, taste information is encoded by specialized cells present in taste buds of the tongue,” she said. “Taste receptors expressed in these cells can detect different chemicals. Molecular and functional differences in receptors expressed in different cells allow recognition of different tastes, such as salty, sour, sweet, bitter, or umami.”

Dahanukar’s team answered this question by genetically engineering a fly in which only a single defined class of pharyngeal neurons is active. The team then tested this fly in different feeding experiments to understand what the fly can or cannot do compared to animals that have all their taste neurons intact.

“We found single-taste neurons are capable of responding and activating behavioral responses to more than one tastant category — sweet and amino acids in our study,” said Yu-Chieh David Chen, the first author of the research paper. “We also found that a single tastant category — amino acids in our study — can activate multiple classes of taste neurons.”

The team also tested flies that had no functional taste neurons. Such flies were incapable of making any proper feeding decisions, no matter the food choices — whether these were two attractive stimuli, one attractive and one aversive, or one nutritive and the other nonnutritive.

The researchers found food choice decisions cannot be made in the absence of taste input; the latter is critical for ensuring appropriate food choice and feeding behavior. Further, flies that had pharyngeal sweet taste neurons as the only source of taste input were consistently able to select more palatable food.

“Altogether, our results argue for the existence of a combinatorial coding system, wherein multiple neurons coordinate the response to any given tastant,” Dahanukar said. 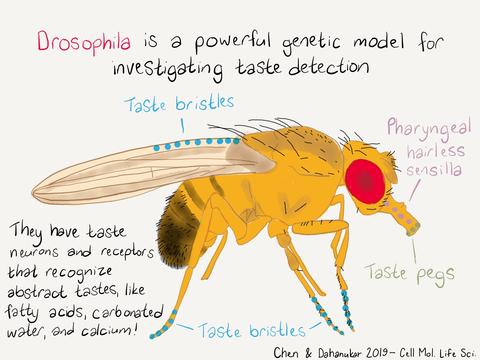 The study is the first to directly test the impact of loss of all taste neurons on behavioral responses to tastants of different categories. It is also the first to test whether a single class of taste neurons is sufficient for food choice and feeding behavior.

“Along with several other recent studies in the field, our work also invites revisiting some established ideas about how insect taste is organized,” Dahanukar said. “Rather than encoding tastes as in mammals, flies appear to encode some combination of valence — attractive versus aversive — and tastant identity.”

Her team anticipates that knowing how taste neurons work in flies will facilitate insect studies of greater health or agricultural importance.

“We are building tools for asking the same sorts of questions in mosquitoes,” Dahanukar said. “Such studies could offer potential targets for manipulating feeding behaviors of pests or disease vectors in surveillance or control strategies.”

She acknowledged that her lab has only evaluated a single taste neuron within the system it set up, with many more remaining to be studied.

“We are interested in understanding what these neurons sense and how they act, individually and as part of a group, to control parameters that lead to either promotion or cessation of food intake,” said Vaibhav Menon, a graduate student in Dahanukar’s lab and a co-author on the study.

The team plans to apply some of the same strategies to investigate how feeding behavior is controlled in mosquitoes.

Dahanukar, Chen, and Menon were joined in the study by Ryan Matthew Joseph. Chen is now at New York University; Joseph is at Riverside City College.

The research paper is titled “Control of sugar and amino acid feeding via pharyngeal taste neurons.”

Share This
More News
Let us help you with your search